On April 7th, 2015, Caledonia took the monumental step of approving a referendum asking, “should Caledonia pursue an independent school district?” It was reminiscent of an election 10 years before when Caledonia voted to become a village. The vote was advisory, but accomplished the goal of gauging interest in the community and providing the village board with an indication of how to proceed. 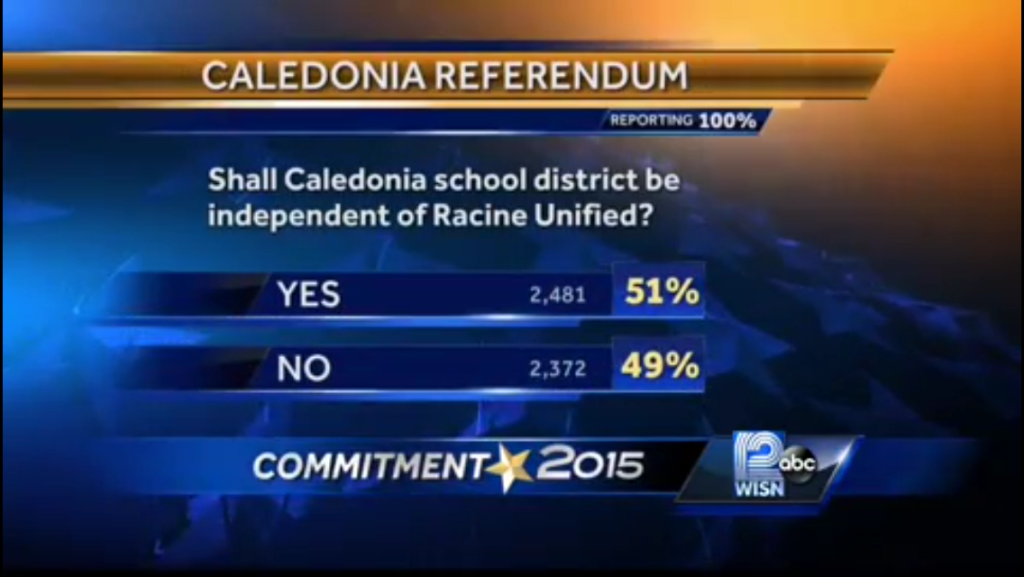 As with the process of becoming a village, a special bill was needed to give Caledonia the freedom to vote for one. In 2005, the Wisconsin legislature passed legislation allowing Caledonia to become one of the largest villages in the state, and we are now working with our state Senator, Van Wanggaard to do the same now for this project.

We had a goal of another election the next April, for a final “yes” vote on becoming an independent school district, in coordination with an expected law change. That never came.

However, directly following our efforts RUSD was forced to invest in Caledonia by rebuilding Olympia Brown, and expanding Gifford Middle School. Also, our senator helped pass a law requiring two years of passing standards or allow us a vote to leave. They barely passed that threshold one year, and Covid-19 has cut 2020 short.

We appreciate the changes, but are tired of waiting. We want to vote whether to stay or leave once and for all. In order to get to that point we need one more action from the village board: to commission a feasibility study on the creation of an independent school district. We need this to know the true costs and process of leaving before voting for it. Any law change will likely include this requirement.

Once the feasibility study is complete, our non-profit organization, Citizens For A Caledonia School District will educate the voters of Caledonia. Every home will have a copy of that study.

Upon approval of a new referendum, Caledonia will legally start the ticking clock, and an interim, local school board will be elected to supervise the process over the following years.

Thank you for being a part of this with us, and making it a reality. Nothing gets more local that this, and literally thousands of children will be forever impacted by your actions. The course of our village will be instantly improved and our identity as a community will be galvanized.