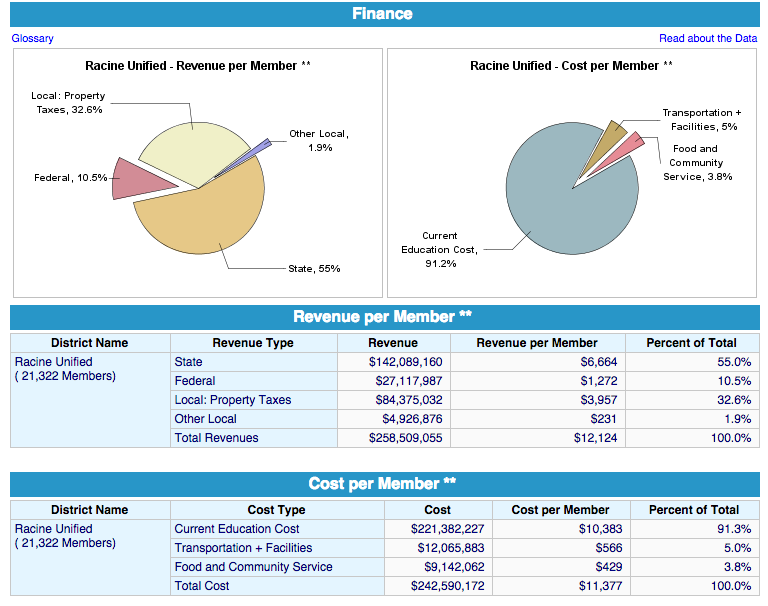 Do you believe education should be as local as possible?

Do you support the idea that local communities should be responsible for their own education choices and dollars?

Have you heard detractors of such an idea claim that revenues lost would harm children and their education?

We have found this is not true.

RACINE UNIFIED HAS MILLIONS IN SURPLUS

State aid is rising this next year, making the expected surplus predictably higher still. These numbers include the initial amount collected by the state for open enrollment students, meaning the net surplus is about $7,442,000. An astounding, and unreported number.

Where is this money going? 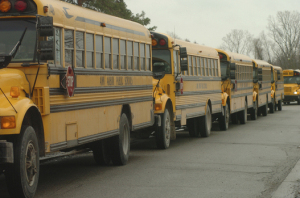 The ubiquitous pictures of broken windows, dilapidated walls, aging desks, missing floor tiles and leaking pools should make us wonder where the annual surpluses have gone?

The referendum request on the November 2014 ballot for $8.5 million per year for 15 years was shocking in light of the fact that RUSD is running a roughly 5% surplus each year. The fact that this is despite the student-flight is even more shocking – open enrollment has now grown to 1,272 students, or precisely $8,476,608 in lost revenue per year… almost the exact number being sought in the referendum.

The referendum was approved, but Caledonia and Sturtevant each voted it down. Nonetheless, they were outvoted. This is precisely the local accountability and autonomy that we are refused to have.

If Racine Unified cannot retain it’s own students, should they be rewarded with a band-aid of the same amount they lose, while they still have that $7.4 million surplus?

MILLIONS OF DOLLARS LEAVING THE DISTRICT BY CHOICE

In a recent presentation by Racine Unified Superintendent Haws and COO David Hazen, they admitted their best estimates of children who are attending a choice school in Racine now stands at approximately 1,500. They peg the probable number of students who left Unified to attend a choice school at “less than 50%.” Assuming the number is 700, this is an additional $4,664,800 that has left the district for different education choices – by parents in low income brackets.

In total, Racine Unified has lost $13,141,408 this year alone to open enrollment and choice students leaving the district when given the opportunity. 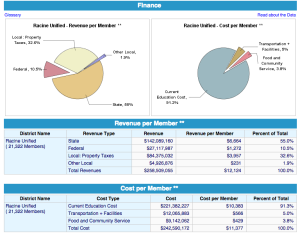 Considering open enrollment was virtually non-existent before 1999 (11 students), this indicates a tragic, systemic problem that is not getting better. The perception of employers, prospective homebuyers and existing families is overwhelmingly negative, and considering the $7.44 million surplus last year alone, it is clear that money is not the problem in RUSD. We don’t have anymore time to cross our fingers and hope the next idea works.

We want our tax dollars returned to our local communities. The City of Racine deserves to allocate each dollar for it’s children and use that surplus for their own improvement. Caledonia, Mount Pleasant, Sturtevant and other communities considering a move deserve it as well.

Our children deserve the best education possible for them, and while we can come together as a community to help each other, it should not be at the expense of some while lining the bank accounts of districts that don’t ever bend the curve.

TIME FOR A FRESH START FOR RACINE AND THE VILLAGES

The time has come to allow Caledonia to grow on it’s own. The time is right for Racine to chart a new course by doing something it has never done before, and when it happens, each new district will have millions of dollars with which to establish a fresh start.

The time has come to return our education dollars home.

A copy of the current Wisconsin statute governing the creation of a school district can be found HERE.

Note: This report was assembled in part by three parents in RUSD, representing Wind Point, Caledonia and Mount Pleasant.