Resident Eric Butcher wrote a very thoughtful, detailed piece and sent it to our board members, and local media, answering the false statements we also feel were made by our assemblyman on July 6, 2015. Several board members were swayed by these statements, and Mr. Butcher goes line by line and shows how each one is so easily proven false, it’s a wonder how a sitting state legislator could make them.

Audio below of the original statement by Weatherston:

The most glaring part was saying Caledonia would get “virtually zero [state aid].” This is the clip of that statement:

The open letter by Mr. Butcher:

Last Monday evening, Rep. Weatherston came to speak, and he made several claims throughout the night that seem to be untrue. I wanted to address some of these statements, as they appear to have affected the vote of several members.

To start out, the voters approved a referendum in April, without any concern for cost, without any limitation. The words did not say, as President Bradley has claimed, “explore” the possibility of a district. It explicitly said, “pursue.” Many of us parents and citizens have written you probably hundreds of letters, made dozens of calls, we have even gone door to door and brought you 1,100 signatures, to which Mr. Weatherston reportedly replied, “well, that was a waste of paper.”

Frankly it appears Mr. Weatherston never has been in  support of this, and would have been an obstacle, regardless of it’s merits or public support. I am forced to conclude that several of his claims on July 6th were completely made up, because no one with any level of knowledge would make the statements he vaguely implied they did. And with that, I start with point #1:

Let me ask, how many of you have called Speaker Vos or Senator Wanggaard? I doubt any of you have, other than President Bradley, who the Speaker said he has told this to.

In a previous meeting, Weatherston actually said, “according to a study my office did, this may actually double taxes.” When asked about this “study,” he could not provide details, or what sources he used, other than “a glance” at the 2009 study. But that 2009 study is clear, in 2009, at WORST CASE numbers, our LOCAL property taxes ASSIGNED FOR RUSD could increase 10-15%. This would be roughly $200 a year on the average home. The average tax bill here in Caledonia is $3,000-3,500. What he said was completely untrue. Today, with things like Act 10 and the change to the first year funding, these numbers are likely far lower. But I don’t know a single person in Caledonia that wouldn’t pay an extra $10-12 a month for a new school district.

My only conclusion is that Rep. Thomas Weatherston, out of his lack of interest in this movement is deliberately saying the most negative things he can and influence people to vote against it. He is not being a leader, he is not listening to the people, and he has blocked us or slowed us down at every turn. Even a conversation with a neighboring assembly person revealed that Mr. Weatherston didn’t try to sell them on the merits of this proposal, but actually scared them by ONLY saying it would mess up our constitution and boundaries.

Please do not fall for this misinformation any longer. And on such an important issue, PLEASE do your homework. PLEASE research the numbers. PLEASE contact Speaker Vos and Senator Wanggaard, who has been the most supportive to learn about their proposal to make this possible.

As a trustee of our village, this is fundamental to being in the seat you hold, and I’m asking you to do it.

We have started raising money ourselves to pay for the study, and have raised enough for a healthy retainer. I hope the village board comes together and revisits this proposal and agrees to fund the rest.

Thank you for listening, 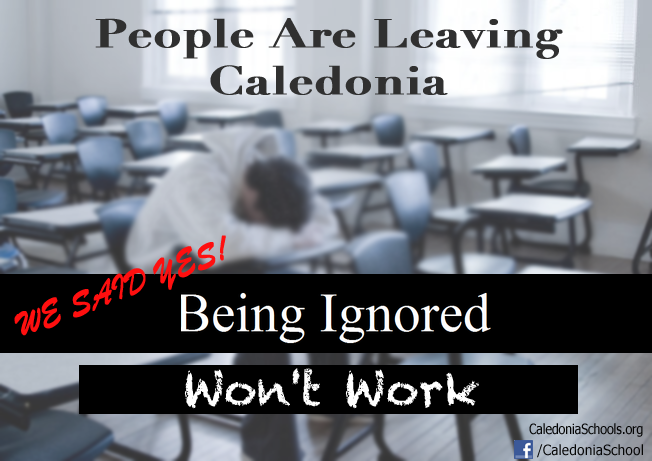